If you find cigarette butts strewn inside a bird’s nest, it is not the result of an urban wasteland but a tactic put in place by the nester itself.

Using the inappropriately disposed of material to make an effective defense against invading pests is quite a thrifty and green ploy. Inner city birds have managed to successfully stave off parasitic mites from their nests using butts from a previously smoked cigarette.
The discovery imitates the behavior of wild birds that use chemical-emitting plants to protect their nests from mite invasions. Studies have shown that the chemical properties found in tobacco create similar repellent effects as the plants.

Cigarette butts also have an advantage over the repellant foliage by acting as insulation for the nest. The discard filters are used as a building material in the nest to maintain a cozy, pest-free home.

As many as 48 cigarette butts were found in the nests of various birds.  Smaller birds like house sparrows and finches used an average of 10 filters from smoked cigarettes-making this common piece of litter a valuable object to a feathered nest builder.

Observed nests with a higher count of butts had zero to significantly less mites. Nicotine was the main ingredient that attributed to repelling the invasive bugs. It is a natural defense used by tobacco farmers to protect their crop from destructive parasites.

A combination of nicotine and other substances are ostensibly contributing to effectively protecting the homes of birds. A recent study found that the cellulose found in filters from a smoked cigarette compared to the cellulose in a non-smoked one, attracted fewer ectoparasites.

Scientists have not ruled out that the repel factor could be a beneficial coincidence, and the birds are merely using the butts only for the decent insulation. However, it would be wise for the birds to use a smoked cigarette to deter mites.

This behavior is mutually beneficial for birds and people as it not only protects birds but cleanses our streets of the waste flicked upon the ground. But this certainly doesn’t condone littering of cigarette butts as the bird population is far too small to clean up an inconsiderate habit. But it is definitely collecting a small percentage of the litter in our streets and using the trash to combat an unwanted guest.

Fill out the form below and we will contact you within minutes to schedule your free inspection and estimate or answer any questions. 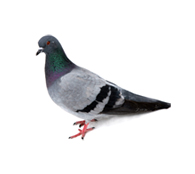